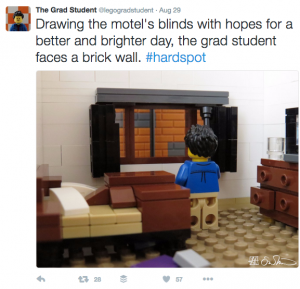 Graduate students are very creative, and I recently learned about an anonymous graduate student in her/his sixth year at a private, West Coast university who is more creative than most – @legogradstudent. I’ve been out of graduate school for more years than I like to admit,1 but I can still relate to the feelings @legogradstudent captures in her/his tweets. S/he has just short of 2600 followers now, but I’m sure that number is going to grow. Inside Higher Ed described her/him this way in the article that brought her/him to my attention:

Lego Grad Student has fans across disciplines, who often use some variation of “devastatingly true” to describe his experiences. Indeed, his tableaux focus not on the intricacies of his research but rather on the human experience of graduate school: feelings of being on a treadmill to nowhere, being beaten to the intellectual punch by colleagues, using sophisticated avoidance techniques during a class discussion and the horror of seeing free food disappear before his eyes at departmental events.

I recently learned of a new website that is worth putting in your bookmark list or adding to the subscription list of your RSS reader: Letters from graduate school. Here’s what they say about themselves.

For every graduate student, graduate school is a different experience filled with ups, downs, failures, and successes. The goal of Letters from Graduate School is to build a collective of graduate school experiences—your experience, in your own voice! (http://lettersfromgradschool.org)

If Issue 1 is any indication, Letters from Graduate School will be a valuable resource for graduate students and graduate advisors. I look forward to reading the essays in future issues.