I last taught my graduate course in conservation biology in Fall 2015. Holly Brown, my teaching assistant in the course, had to fill in for me a couple of times because of commitments that took me out of town. She designed a creative and powerful exercise for one of the times I was out of town. In written evaluations of the course, almost every student reported that it was eye opening and, quite possibly, the most useful exercise in the course. What was this creative and powerful exercise? Holly’s version of a privilege walk. If you don’t know what that is or you want to know how she used a privilege walk in the context of conservation or both, it’s your lucky day. A paper describing the exercise recently appeared in Conservation Biology. Here’s the citation and a link.

The debate about new conservation and alternatives

I mentioned a couple of weeks ago that I fall roughly into the camp of New Conservationists. When I took the Future of Conservation survey, I scored relatively strongly on  “means of improving human welfare” and slightly positive on “willingness to embrace markets and capitalism.” In catching up on my reading this weekend, I discovered that the folks behind the survey also surveyed attendees at the 2015 International Congress of Conservation Biology. Here’s the abstract of the paper describing what they found (full citation and link below):

Climate change and biodiversity loss in the Cape Floristic Region

Jasper Slingsby is the lead author on a recent paper in the Proceedings of the National Academy of Sciences describing some of the work he, John Silander, and others did as part of our recently concluded Dimensions of Biodiversity project. Here’s the abstract. Follow the links below to find the full paper and a story about it in UConn Today.

Prolonged periods of extreme heat or drought in the first year after fire affect the resilience and diversity of fire-dependent ecosystems by inhibiting seed germination or increasing mortality of seedlings and resprouting individuals. This interaction between weather and fire is of growing concern as climate changes, particularly in systems subject to stand-replacing crown fires, such as most Mediterranean-type ecosystems. We examined the longest running set of permanent vegetation plots in the Fynbos of South Africa (44 y), finding a significant decline in the diversity of plots driven by increasingly severe postfire summer weather events (number of consecutive days with high temperatures and no rain) and legacy effects of historical woody alien plant densities 30 y after clearing. Species that resprout after fire and/or have graminoid or herb growth forms were particularly affected by postfire weather, whereas all species were sensitive to invasive plants. Observed differences in the response of functional types to extreme postfire weather could drive major shifts in ecosystem structure and function such as altered fire behavior, hydrology, and carbon storage. An estimated 0.5 °C increase in maximum temperature tolerance of the species sets unique to each survey further suggests selection for species adapted to hotter conditions. Taken together, our results show climate change impacts on biodiversity in the hyperdiverse Cape Floristic Region and demonstrate an important interaction between extreme weather and disturbance by fire that may make flammable ecosystems particularly sensitive to climate change.

It appears that I’m a New Conservationist 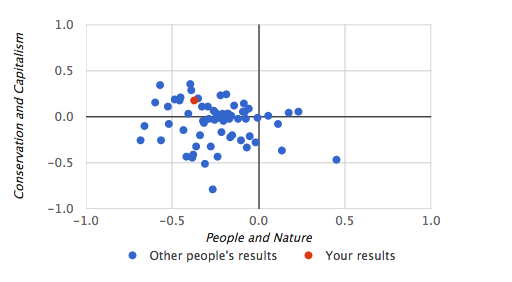 I recently discovered the Future of Conservation Project. It’s a project designed “to explore the views of conservationists on a range of issues, as a way of informing debates on the future of conservation.” As the About page says,

Recent debates about the future of conservation have been dominated by a few high-profile individuals, whose views seem to fit fairly neatly into polarised positions. In this survey, we are exploring the range of views that exist within the conservation movement globally, and how this varies by key demographic characteristics such as age, gender, geography and educational background.

The blue dots in the figure above are results from the 99 people who responded to the survey before me. Here’s how to interpret my results:

How to interpret your results

Your position on the two axes above reflects your survey answers. A move from left to right along the horizontal axis (people/nature) implies a shift from seeing conservation as a means of improving human welfare to conservation for nature’s own sake.

The vertical axis (conservation & capitalism) indicates a spectrum of willingness to embrace markets and capitalism as conservation tools: the higher up the graph your score is, the more pro-markets it is. This places you in the top left quadrant of the graph – a position suggesting your views on these particular dimensions of the debate are most closely related to those of ‘new conservationists’ as set out in the literature.

Your thinking most closely aligns with: New Conservation

Central to the ‘new conservation’ position is a shift towards framing conservation as being about protecting nature in order to improve human wellbeing (especially that of the poor), rather than for biodiversity’s own sake. ‘New conservationists’ believe that win-win situations in which people benefit from conservation can often be achieved by promoting economic growth and partnering with corporations.

Although new conservation advocates have been criticised for doing away with nature’s intrinsic value, key authors within the movement have responded by clarifying that their motive is not so much an ethical as a strategic or pragmatic one. In other words, they claim that conservation needs to emphasise nature’s instrumental value to people because this better promotes support for conservation compared to arguments based solely on species’ rights to exist.

If you’re interested in taking the survey, here’s the link: http://www.futureconservation.org/.

Increased equity and pro-poor actions are not only moral issues to be kept in mind by conservationists. They are, rather, central to the larger goal of protecting the planet. – Bill Murdoch

In the past 15-20 years, conservation biologists have become increasingly aware that successful conservation efforts require the support and involvement of local communities, but only more recently have we become fully aware that getting that support and involvement requires that we pay attention to what communities need, not only to what we want. Reducing economic inequality, and in particular improving the lives of those in poverty, is not only the right thing to do on its own terms. It’s the only way we can protect the natural systems we can care about in the long term.

In Fall 2015, I discussed some of these issues in my graduate course in conservation biology. The problem is that it’s easy to say the “right” words and to congratulate ourselves for our wisdom and generosity. It’s harder to see how the attitudes those of us who live in relatively prosperous communities are influenced by the economic privileges we have. Those privileges are part of the reason it’s hard for us to understand farmers, ranchers, and oilmen who seem to have little regard for the land. I grew up among farmers and ranchers in southern Idaho, and the people I knew care as deeply about the land as I do. The difference? They draw their livelihood directly from the land, and their livelihood is less secure. Not unreasonably, they focus on immediate needs,1 not far-off benefits.

Fortunately, I had a very talented teaching assistant for the course, Holly Brown. She had the idea of using a “privilege walk” to illustrate the ways in which we – graduate students and faculty at UConn – are privileged when compared to many of those living in areas where conservation action is needed. Holly, Ambika Kamath, and Margaret Rubega describe the exercise in a recent article in Conservation Biology. This anonymous comment from one of our students was particularly striking:

The main thing I took away was that, when it comes to issues that are controversial (including climate change or biodiversity preservation), approaching those who might oppose ecologists with an understanding of my own privilege and how it differs from the background of others can help me to open myself up to innovative solutions, instead of imposing my beliefs on others.

If you teach a course in conservation biology, I encourage you to read Holly’s article and use some of the ideas in it the next time you teach your course.