Last week I described an experiment that was reasonably well controlled. We1 randomized genotypes within populations across two experimental gardens to determine whether certain leaf traits changed with the age of the plant, the garden in which they were grown or both. Interpreting the results of those experiments is reasonably straightforward. At the end, I was setting up for an exploration of what might be required to infer a causal influence of home environment on plant traits from an observed statistical association between the environment in the sites from which seeds were collected and the traits of the plants grown from those seeds in the gardens.

I’m going to shift gears, because I ran across a (non-ecological) example should be easier to understand. Putting off discussion of Protea for another week also gives me more time to get a simplified version of the data prepared and analyzed (in an R notebook). So I’m going to examine a recent report that claims evidence for the “Scully effect”, which is the claim that young women who watched Dr. Dana Scully in the X Files have a more positive impression of STEM fields, were more likely to pursue a career in STEM, and see Scully as a role model than those who didn’t watch the X Files.2

I’ll focus on only the first claim. The report3 states it more precisely this way:

Women who are medium/heavy watchers of The X-Fileshold more positive views of STEM than non/light watchers, and several survey questions link this directly to the influence of Scully’s character.

And I’ll focus on only one of the pieces of evidence in the report, namely

A greater percentage of medium/heavy viewers of The X-Files strongly believe that young women should be encouraged to study STEM than non/light viewers (56% compared to 47%).

One of the first observations I made in this series is that causes precede effects. That condition is clearly satisfied. The women included in the survey were chosen specifically to be old enough (a) to have watched the original X Files or the current seasons and (b) “to have entered the post-college workforce.” One reason we might be skeptical of the claim “Having watched Scully increases the probability that women believe young women should be encouraged to study STEM” is that women who watched Scully may differ from women who didn’t watch Scully in ways that would have predisposed them to encourage young women to study STEM. For example, it’s reasonable to think that women who watched Scully might have already had a greater interest in science than those who didn’t, since the X Files was a science fiction drama series, not a crime fiction or other drama series.

So to conclude that a positive association between watching Scully and encouraging young women to study STEM is evidence that watching Scully causes viewers to encourage young women to study STEM, we need to know that watching Scully or not is the only relevant difference between the women included in the observational sample. If it is, then even though we didn’t design the experiment and randomly assign women to one treatment or the other, it is as if we did. This is where Rubin’s causal model comes in.5 It helps us think about how we might be able to determine that the watching and non-watching groups are equivalent (or how we might make them essentially equivalent if they aren’t already). That’s where we’ll pick up next week.6

I don’t remember when I first heard about R Notebooks, but it was quite a while ago. I finally decided to investigate them last weekend, and I’m hooked. I expect to be doing much of my R work in R notebooks from now on. For purposes of reproducibility, I still plan to extract R code from what are referred to as “chunks” to produce standalone R scripts that I can rerun from the R console to verify my results, but the interactive notebooks will allow me to run chunks as I’m developing new code and to document what I’m doing.

The link above will take you to documentation on R Notebooks. The only downside to them is that to use them you have to use RStudio. That’s not a big downside, since there is a free version available, but I’m still enough of an old fogey that my fingers are used to Emacs, and Emacs is where I generally prefer to edit code. It will take me a while to develop a new workflow, but you can be sure that it will include R Notebooks.

I produced a Randomization demo very quickly once I updated my version of RStudio. I produced HTML simply by saving my notebook to disk. The .nb.html file was automatically produced in the same directory. All I had to do was to upload it to an appropriate directory here. If you have a recent version of RStudio that supports R Notebooks, you can download the Markdown code using the “Code” dropdown at the top right of the page. Simply open the .Rmd file, and RStudio will open it as a notebook. You can then execute chunks yourself to redo the simulation in any way that you care to. That’s even easier than copying and pasting the code I posted earlier.

If you’ve been following along, you realize by now that it’s not easy to infer the cause of a phenomenon, even in a well-controlled experiment. What about observational experiments, which are what many ecologists and evolutionary biologists have? Take one paper of mine that I’m reasonably happy with (PLoS One e52035; 2012. doi: 10.1371/journal.pone.0052035). One part of that paper included an experiment of sorts. We1 established experimental gardens at the Kirstenbosch National Botanical Garden and at a mid-elevation site on Jonaskop mountain about 100km due east of Kirstenbosch. Among other things we were interested both in how certain traits in newly formed leaves (specific leaf area, stomatal pore index, and leaf area) differed depending on the age of the plant and on the garden in which they were grown.

This part of the paper is analogous to the thought experiment on corn that we’ve discussed so far. Since the plants were grown from wild-collected seedlings, we obviously couldn’t duplicate genotypes across gardens. We also didn’t have enough seed from individual maternal plants to replicate families across the gardens. So we did the best we could. We randomized seedlings within populations and split populations across gardens. You’ll see the results from this part of the analysis in the figure below. 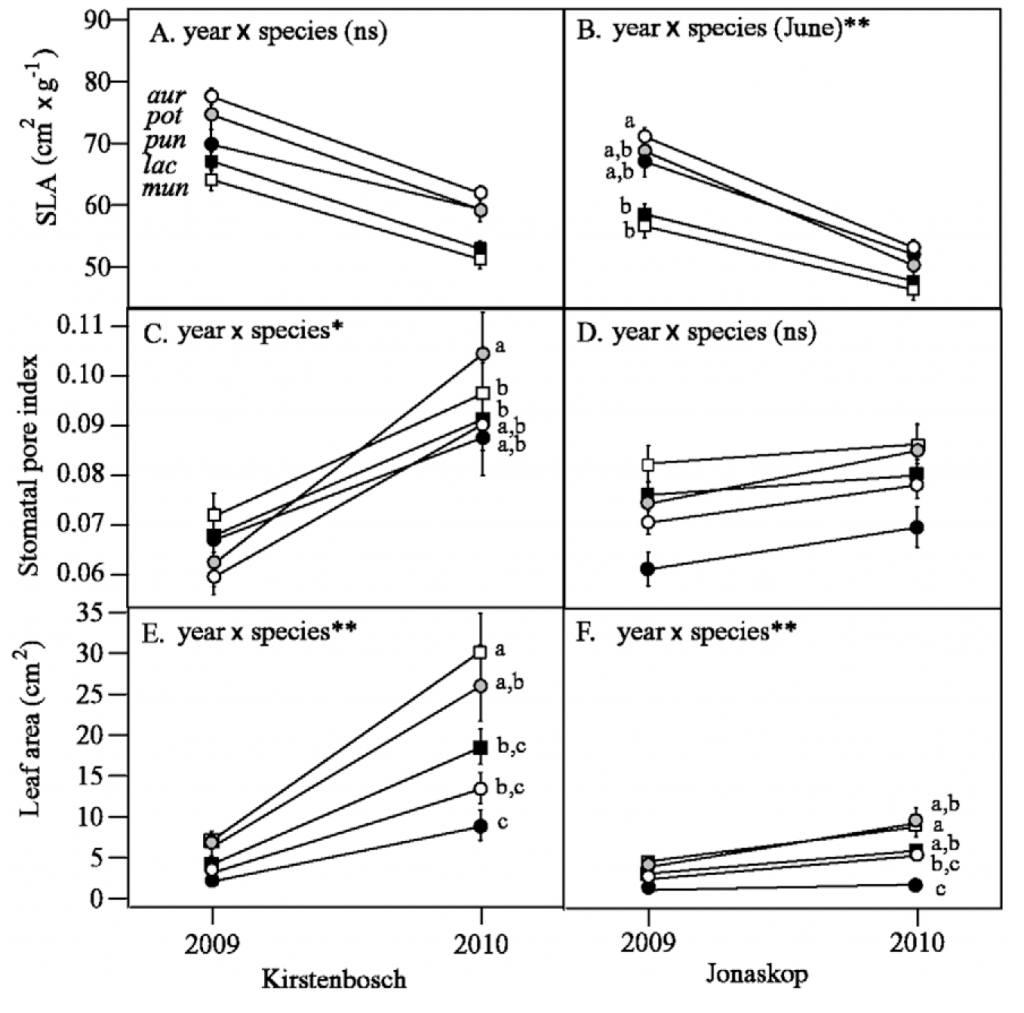 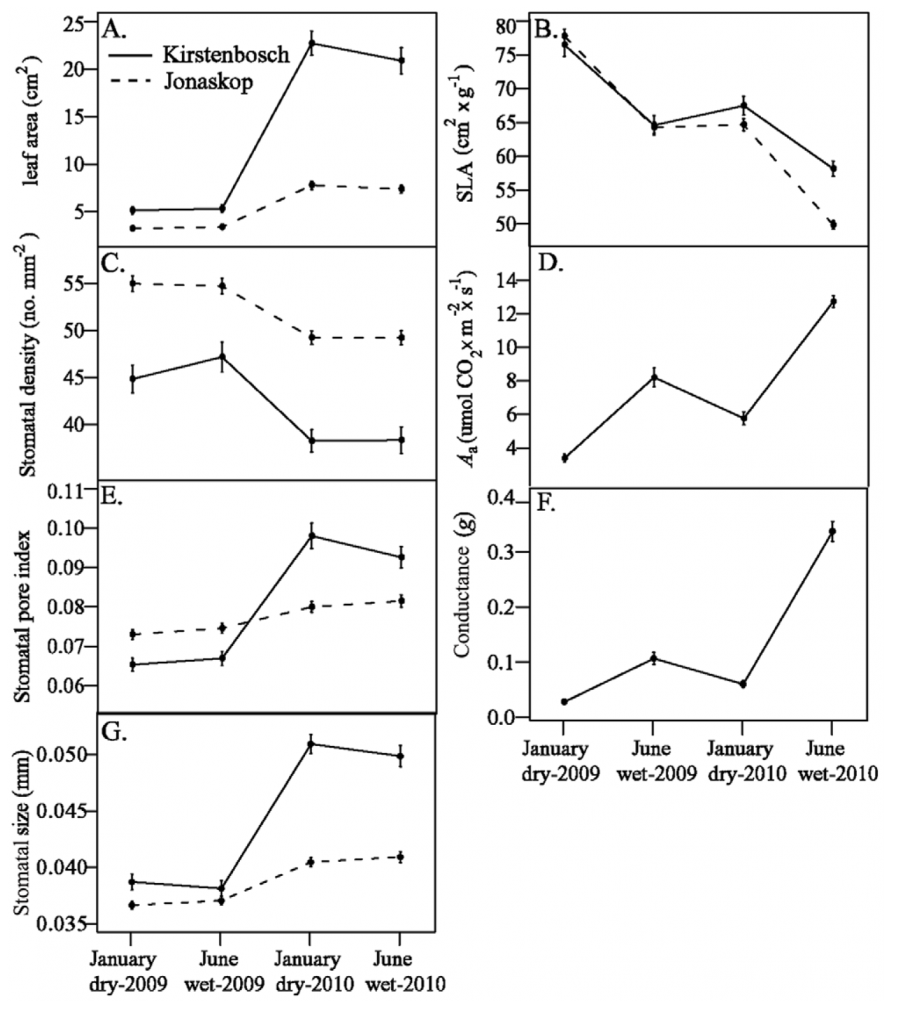 Similarly, the figure above makes it clear that which garden the plants are grown in influences these (and other) traits. These results won’t surprise anyone whose worked with plants. The traits plants have depend both on how old the plant is and on where its grown. So far a reasonably straightforward experiment, but how about this? We also wanted to know whether the amount of change in leaf traits depended on measures of resource availability and rainfall seasonality in the places that seeds were collected from. Here we’re asking a more complicated question.

Take SLA, for example, and imagine that we’re asking the question just about changes in SLA for plants grown at Jonaskop. Now the fully fleshed out the question is something like this:

It’s that middle step that’s tricky. We don’t need to do anything special to run a regression on changes in SLA and home site characteristics, but to interpret that regression as evidence for the causal story in that middle step we need to do something more. Unlike the nicely randomized experiment with which we began this post, we aren’t randomizing plants across sites and allowing them to adapt. What we have is purely observational data to address this question. To what extent can we make a causal inference from these data? That’s the question I’ll turn to in the next installment.

END_OF_DOCUMENT_TOKEN_TO_BE_REPLACED

Causal inference in ecology – The challenge of falsification

It sounds so simple. You have a hypothesis. You design an experiment to test it. If the predicted result doesn’t happen, reject the hypothesis and start over. That’s how science works, right? We can’t prove a hypothesis, but we can reject them. That’s how we make progress. That’s what makes science empirical. End of story right? Would I be asking that question if it were?

Let’s look at the logic a bit more carefully.

The bottom line is, there are a lot of ways that the experiment could have gone wrong. When an experiment fails to give the prediction we expected, our natural tendency is to reject the hypothesis we were testing, but strictly speaking, we don’t know whether our hypothesis is wrong, or whether there was something about our experimental conditions that made the experiment a bad test of the hypothesis.

To my mind this is why we trust causal inferences from carefully controlled experiments more than those from observational studies. In a carefully controlled experiment, we make everything about the treatment and control as similar as possible, except for the difference in treatment. That way if we see a treatment effect, we have a lot more confidence in ascribing the result to the treatment not something else, and we have a lot more confidence in saying that the treatment has no effect (and our hypothesis is satisfied) if we fail to observe the expected result.

Next time we’ll talk about how to apply similar logic to observational studies and explore the challenge of making causal inferences from them.

Eric Menges has been studying rare plants and fire ecology at Archbold Biological Station for more than 30 years. I just learned that he’s the subject (and narrator) of a short, 16-minute video on Vimeo that I’ve embedded above. Please take the time to watch it. You’ll learn a lot.

Last week was finals week at UConn, which means Commencement weekend began on Saturday. I represented the Provost’s Office at the PharmD ceremony at 9:00am Saturday morning, and our Master’s Commencement Ceremony was held at 1:30pm. I had yesterday off, but because of all the things that accumulated last week, I didn’t have time to write the next installment of this series. It will return next Monday, barring unforseen complications.

In the meantime, this page contains links to the posts that have appeared so far. It also contains links to some related posts that you might find interesting. You may also have noticed the “Causal inference in ecology” label at the top of this page. That’s a link to the same page of posts in case you want to find it again.