Getting organized in 2018 – non-Word software for writing projects (Scrivener)

Getting organized in 2018 – links to the series 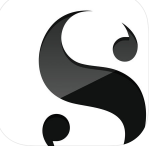 Last week I described Ulysses, which provides a simple interface for ASCII text files combined with Markdown for publishing in a variety of formats, including WordPress blogs. This week I’m going to describe a different kind of tool. It’s one I use much less frequently than Ulysses, and it’s one I could do without, but it’s one I also find handy for certain types of writing projects –Scrivener.

Scrivener is more like a traditional word processor than Ulysses. You select fonts and font sizes, insert tables and bulleted lists, use italic and bold in a way that’s more familiar than the underscore and asterisk approach Markup uses.1 It allows you to set margins, and most of the other things you’re used to doing in a traditional word processor. Unlike Ulysses (or Emacs + LaTeX) and like Word, Scrivener doesn’t separate markup from presentation. 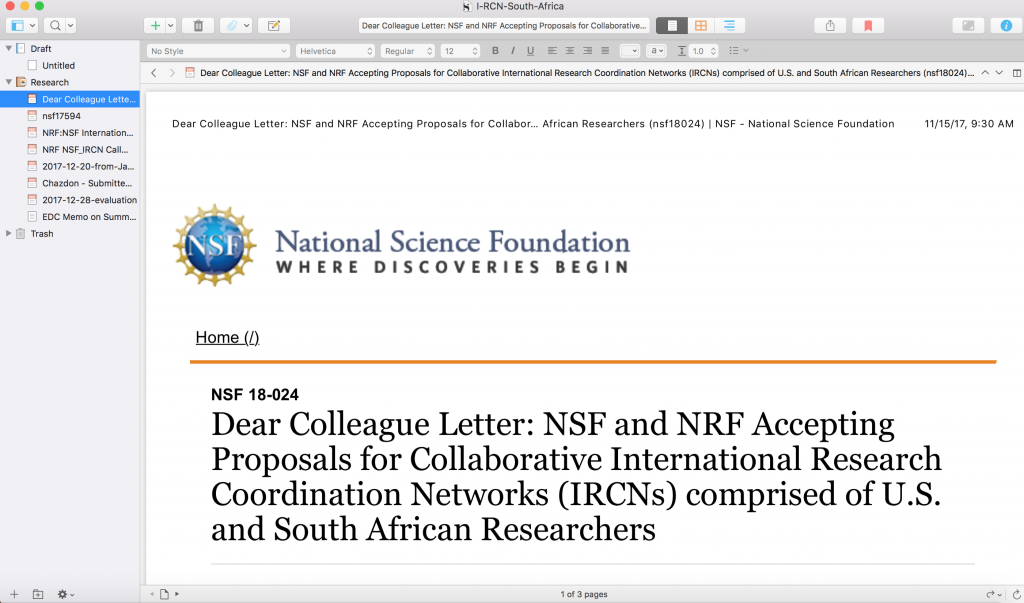 What Scrivener does that a traditional word processor doesn’t do is to provide a single environment in which (nearly) everything you need for a writing project can live. Take a look at the screenshot above to see an example of a project that’s in a very early stage. The National Science Foundation released a “Dear Colleague” letter describing an opportunity for “International Research Coordination Networks comprised of U.S. and South African Researchers.” I’ve been in contact with several U.S. and South African colleagues about putting a proposal together, and I’m using Scrivener to keep all of the information I collect accessible. That’s the items under the “Research” tab on the left.

The “Draft” tab above that is where I’ll start writing notes when we start serious work on the joint proposal. I’ll have different documents corresponding to notes about the research plan, the management plan, the evaluation plan, and other sections of the proposal. We’ll probably use Google Docs to write the initial draft of the proposal so that each of us can work on it when it’s convenient while ensuring that all of us also have the latest version of the proposal in front of us. So how does Scrivener help? 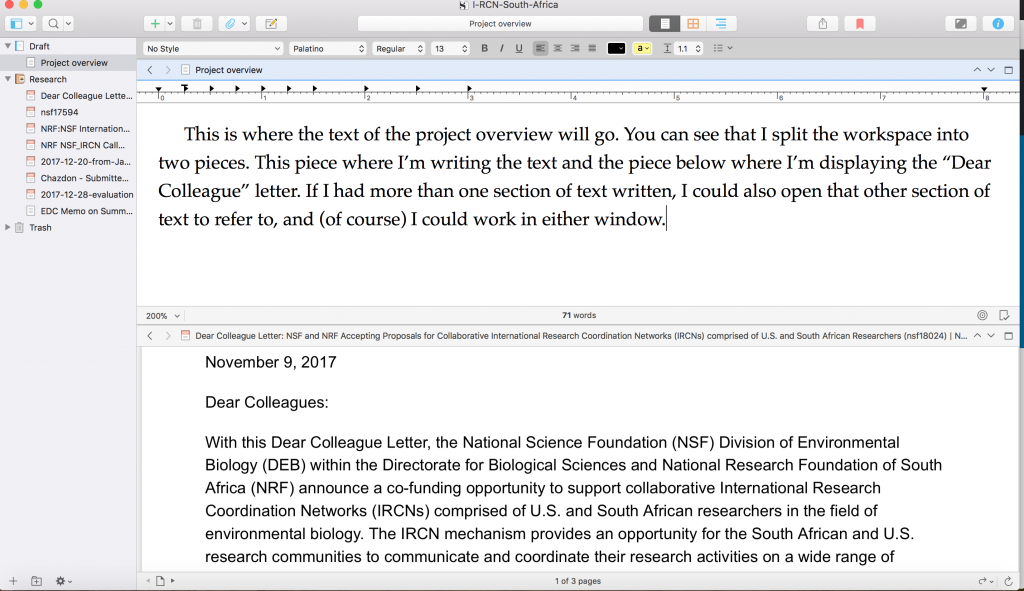 Take a look at the second snapshot of the interface above. The split screen interface is very handy. I don’t have to boot up Firefox or open another application to look at any of the documents or resources I’ve collected. I can look at them while I’m writing, and since I don’t leave Scrivener, I’m less likely to be distracted by something that pops up when I open Firefox or to see that e-mail that just came in that’s begging for attention. Using Scrivener helps me keep my focus where it should be when I’m using it – on writing. 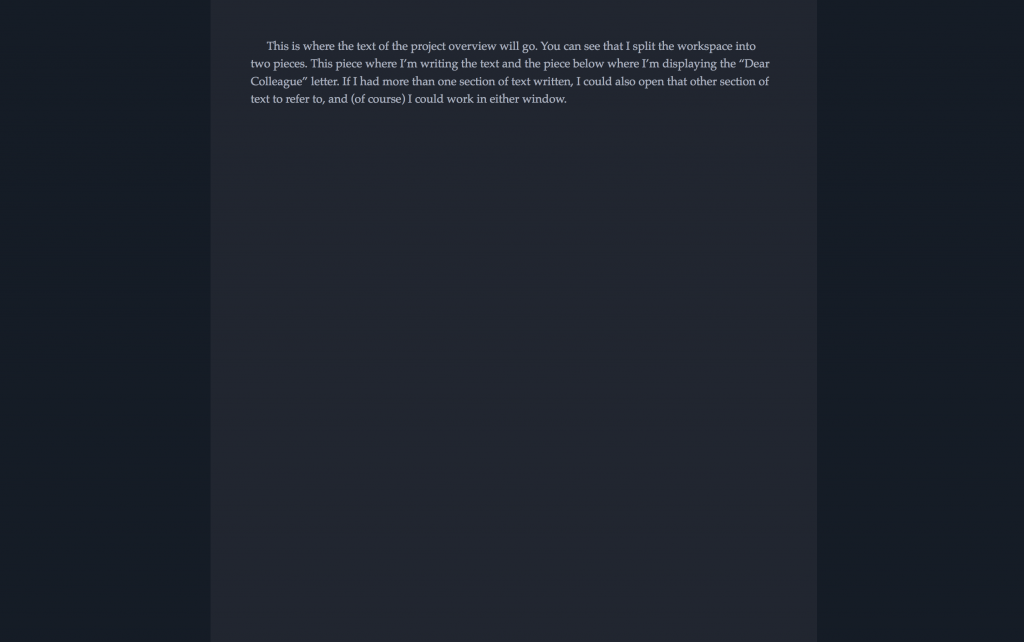 And if I really just need to write and I don’t need to look at any of the resources I’ve gathered, I can put myself into composition mode (illustrated above) and work with even fewer distractions.

In the IRCN project illustrated here, I will probably copy blocks of text from the “Draft” section into a shared Google Doc. When I’m working on a project by myself, I’m liable to start it in Scrivener, get the whole document into good shape, export the result to DOCX, and clean up the formatting in Word.

I don’t really need Scrivener, but it makes avoiding distraction easier. If I’m working on a project by myself, I tend to use Scrivener – unless it’s a project that involves a lot of math when I’ll use Emacs and LaTeX. Scrivener supports a Markdown -> LaTeX export, but I haven’t explored that yet because I find it easier to work directly in LaTeX. I use Scrivener when I anticipate a final export to Word for formatting clean up or when I expect to share a draft with others for comments and suggestions.

Like Ulysses Scrivener is available on Mac, iPhone, and iPad. Unlike Ulysses, there is also a version for Windoze. When I last tried the Windoze version 3-4 years ago, it was much more primitive than the Mac version. I don’t know if that’s changed, and I don’t recall if there’s a version for Android, but it is at least a little less tied to the Mac ecosystem than Ulysses.