A crack in creation 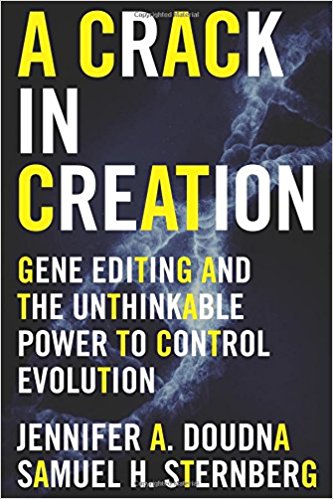 In August, 2012 a paper entitled “A Programmable Dual-RNA–Guided DNA Endonuclease in Adaptive Bacterial Immunity” appeared in Science (doi: 10.1126/science.1225829). I probably saw the title in the table of contents of the August 17th issue and skipped right by. Bacterial immunity isn’t a topic a pay a lot of attention to. OK. Let’s be honest. I don’t pay any attention to bacterial immunity.

Not too long after that paper appeared, I started hearing about something called CRISPR-Cas9. I didn’t know what it was or what it might be useful for, only that a lot of people who were interested in molecular genetics were paying attention to it, especially those who were interested in using molecular tools to edit genomes of complex, multicellular organisms. I started to see newspaper and magazine articles talking about how this new technology would revolutionize biology and medicine in the same way that the discovery and use of restriction endonucleases had revolutionized them in the mid-1970s.

Some of the most ambitious projections suggested that we could be entering an era of designer genes in which gene therapy might be used not only to modify or replace genes that lead to diseases like sickle cell anemia, but in which it might be used to enhance “normal” functions. Not too long after that I started hearing about biologists who realized that CRISPR-Cas9 could be used to build gene drives that might be used to control pest populations. A lot of people began worrying about the ethical issues associated with use of CRISPR-Cas9 (e.g., doi: 10.1093/bmb/ldx002).

In June, two pioneers in the work leading to development of CRISPR-Cas9 published a book outlining the history of the work and exploring some of the ethical implications. I am a little less than halfway through A crack in creation, but so far I have found it very readable and informative. Reading this book is the only reason I know about the Science paper from 2012. Only now, 5 years later, am I taking the time to learn about this new technology. I had an inkling of its power and utility before I started reading, and I was (am still am) uneasy about some potential applications. Since so much of the basic science is very distant from my expertise and experience, I can’t judge the historical accuracy of the story Douda and Sternberg tell, but they seem generous in giving credit to other scientists who made contributions and very aware that their creative insights depended on previous work by many other people. That makes me think that if there are inaccuracies in the story, they are inadvertant and unintentional.

If you’ve been waiting for a good time to learn more about CRISPR-Cas9, your wait is over. Click on the image above, go to Amazon, and buy yourself a copy of A crack in creation or check it out from your library. You won’t be disappointed.

(In case you’re wondering, I don’t know either of the authors, and I won’t get any Amazon affilliate credits if you buy the book from Amazon. I’m endorsing the book only because I’ve found it very informative. It’s also written very clearly, clearly enough that I think your non-biologist friends and relatives would find it interesting and informative, too.)