Last July, the United States banned nearly all commercial trade in ivory. Last Friday, China announced that it will “end the processing and selling of ivory and ivory products by the end of March as it phases out the legal trade” (The New York Times).

There are some professionals who believe that legal trade in ivory promotes conservation. (See this article from The Guardian for some of the give and take.) The arguments are two-fold (from The Guardian):

I haven’t studied the issue carefully, but I am not persuaded by their arguments. For one thing, Nitin Sekar and Solomon Hsiang point out in The Guardian that the limited legal trade in ivory established in 2008 seems to have increased the amount of poaching. 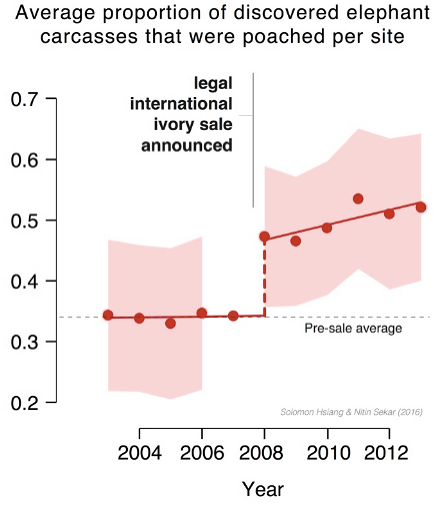 To be fair, with only 5 points from before the 2008 announcement of legal ivory sales and 6 points after, you’d be hard-pressed to demonstrate that a statistical model favoring a switch in poaching rates in 2008 is better than one where rates are simply increasing over time, but either way, the limited trade in ivory introduced in 2008 did not decrease the rate of poaching.

Point 2 is undeniably true. Lifting Africans from poverty is the only way to make lasting progress on any conservation problem in Africa. But that observation argues for promoting policies that directly reduce poverty, like increasing sanitation, enhancing access to health care, and strengthening education. Elephant poaching has increased since 2008, and prices of ivory are high. Is there any evidence that incomes of Africans have improved as a result? If there is, Martin Rowan doesn’t provide it.

That’s why I regard it as good news that China is shutting down its domestic ivory trade. A ban on the legal trade of ivory won’t shut down the black market, any more than a ban on cocaine in the US shut down the cocaine market here. But a ban on the legal trade of ivory will make it more difficult for black marketeers to hide. With strong enforcement, a ban will reduce the incentives to trade in ivory and the incentives for poachers.