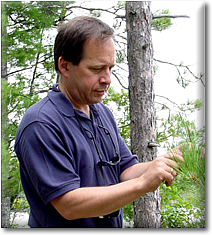 I have been a member of the Department of Ecology & Evolutionary Biology since 1986. My research focuses on the evolution and genetics of plants. I've studied the evolution of plant mating systems; explored how basic principles of ecology, evolutionary biology, and systematics should influence conservation decisiions; and developed statistical methods for analyzing genetic diversity in spatially structured populations.

Since January, 2012 I have been serving as Vice Provost for Graduate Education and Dean of The Graduate School.

Click on one of the tabs to the right for more information about my research. If you're interested in a more detailed summary of my career, download a copy of my CV or click on the links to my Google Scholar page, my papers in UConn's repository (DigitalCommons), or my profile on FigShare, Mendeley, or ORCID.

Most flowering plants reproduce through outrcossing. Pollen from one plant is transferred to another where it germinates on the stigma, grows through the style, and sperm from the pollen unites with an egg to form an embryo that develops into a seed.

But a significant minority of flowering plants reproduce through self-fertilization. Much of my early work was focused on understanding why some plants self and others don't.

What's less obvious is that a plant that self-fertilizes may have an additional advantage. It leaves offspring not only through self-fertilization but by serving as a pollen parent to the outcrossed offspring of other individuals. That segregation advantage could also favor self-fertilization, but whether it exists depends critically on the details of how pollination happens.

My mathematical models helped to illuminate those processes.

We are currently losing species at a rate faster than at any time since the end of the Cretaceous period 60 million years ago. The book I co-edited with Don Falk, Genetics and Conservation of Rare Plants (Oxford University Press, 1991) grew out of my interest in applying basic principles of ecology, evolutionary biology, and systematics to conservation problems.

More recently, I have collaborated with my students and colleagues at other institutions on demographic analyses of rare plant species. With Margaret Evans and Eric Menges, I've examined the influence of fire on persistence in Dicerandra frutescens. With Kathryn Theiss, I've examined the influence of collection for the horticultural trade on persistence of Erasanthe henrici.

Nearly every species on earth occurs in more than a single location, and the individuals in different locations are often genetically distinct. Population geneticists have been interested both in describing the patterns of genetic diversity they find and in understanding the processes that produce them since at least the 1930s. Sewall Wright's F-statistics are among the most widely used statistics in population genetics because they provide a convenient way to summarize the genetic structure of populations.

Over the past fifteen years, I've developed a series of approaches using hierarchical Bayesian models to facilitate analysis of population genetic structure. The basic estimates of F-statistics, as implemented in Hickory, aren't that different from the more standard Weir and Cockerham statistics, but with the help of collaborators from the Department of Statistics, we've illustrated several ways in which that simple approach can be extended to provide considerable new insights.

For the past decade, much of my research has focused on the evolution of Protea in the Cape Floristic Region of southwestern South Africa. We have a small web site where you can find a little bit about the first project focusing on the white proteas (Protea sect. Exsertae), including links to papers, information on collection sites, and links to data sets and code. We have a more extensive web site describing our current Dimensions of Biodiversity project. We'll be adding datasets and code as the project progresses.

This site is licensed under a Creative Commons Attribution-ShareAlike 3.0 Unported License.